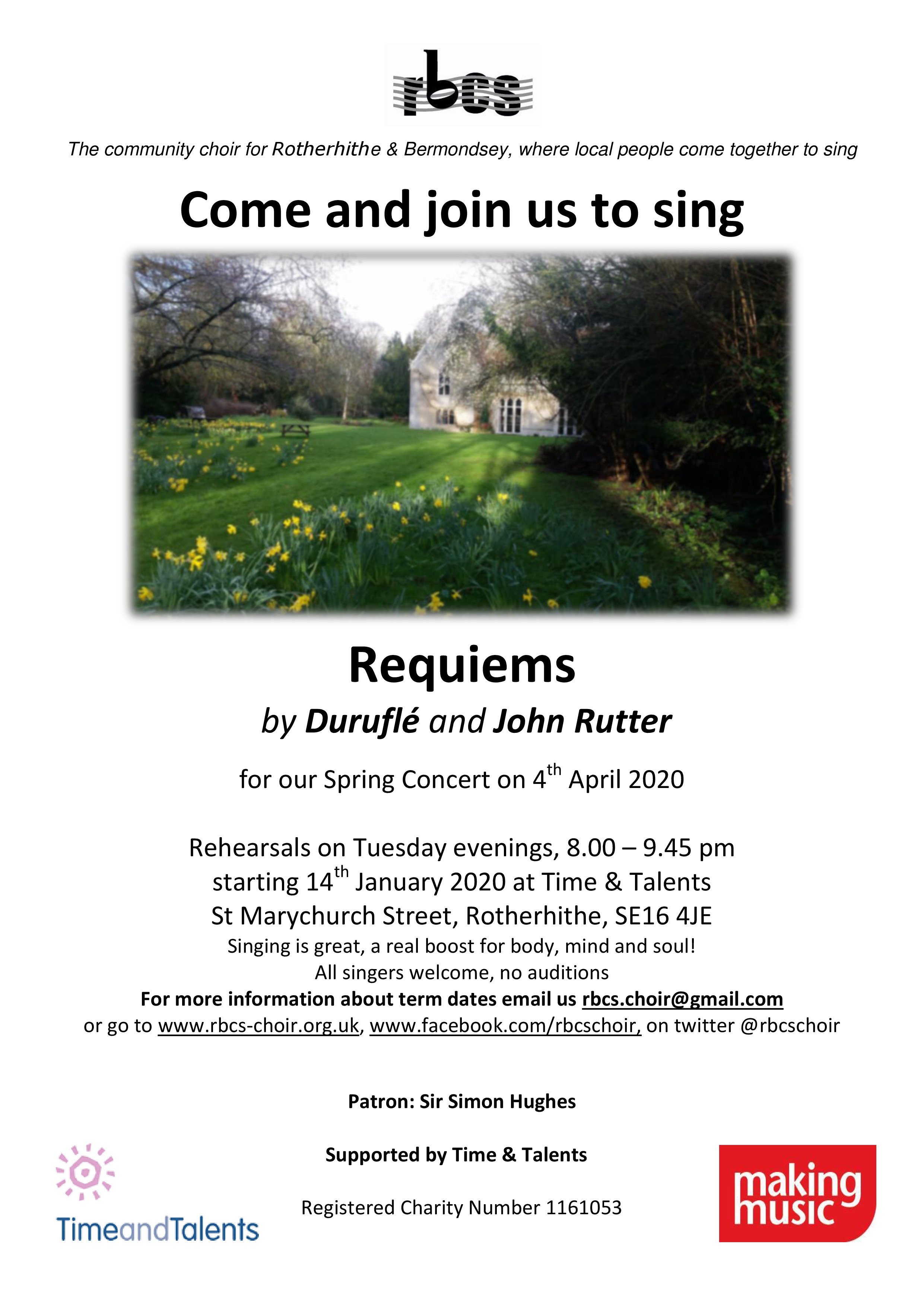 At Christmas 2008 and 2009, we sang carols in Trafalgar Square in aid of the Anthony Nolan leukaemia charity. This led to our being featured in a France3 television report on Christmas traditions around Europe (23 December 2008).
Spring 2009 saw the formation of the RBCS Chamber Orchestra, who accompanied us in an exciting performance of Feel the Spirit (a cycle of gospel settings by John Rutter) and Handel’s stirring Zadok the Priest. In Summer 2009, we again joined forces with the RBCS Chamber Orchestra in Mozart’s Solemn Vespers.
Our Winter Concert 2009 featured two twentieth-century works – Benjamin Britten’s festival cantata Rejoice in the Lamb and John Tavener’s The Lamb – alongside seasonal music including carols from around the world.
We were one of three South London choirs chosen to perform at the Christmas Carol Concert for Guy’s and St Thomas’ Charity at Southward Cathedral on 14 December.
For our Spring Concert 2010, we performed Cherubini’s moving Requiem in C Minor accompanied by the RBCS Chamber Orchestra, flanked by lighter choral pieces including Grayston Ives’ humorous medley Name that Tune. Also in Spring 2010, we sang at the AGM of Southwark Arts Forum, and at the John Bull Arch and Blue Market community festival in Bermondsey.
From 20th to 24th April 2010, we took on the role of on-stage choir in Spymonkey’s acclaimed touring production of Moby Dick during its run at the Lyric Hammersmith.
In Summer term 2010, we focused on two of the best loved works in the choral repertoire: Samuel Barber’s hauntingly beautiful Agnus Dei, familiar to many people from the BBC TV series ‘The Choir’ and Oliver Stone’s Platoon, and Monteverdi’s colourful, dramatic Beatus vir, one of the jewels of Italian baroque music. We also practised and performed a selection of folksongs in traditional and contemporary settings.
At our gala concert on Saturday 9 April 2011, we were privileged to undertake the UK première of the Percussion Mass by London-based contemporary Australian composer Paul Sarcich. We also performed Mozart’s iconic Requiem. We were joined in this special event by RBCS Chamber Orchestra and the RBCS Percussionists.
In December 2011 we again sang carols in Trafalgar Square in aid of the Anthony Nolan charity. Our Christmas 2011 concert featured the lovely Messe de Minuit pour Noël by the French Baroque composer Charpentier, a festive Midnight Mass setting for choir, soloists and chamber orchestra, based on popular French Christmas songs of the time.
Our 2012 Spring concert, in St James’s Church, Bermondsey on 31 March was a performance of Haydn’s Creation – magnificent music from the end of the 18th century
displaying a fusion of exuberance, originality, classical elegance and intellectual power. We were joined by guest soloists and the RBCS Chamber Orchestra.
Our “Quintessentially British” Summer concert, on 14 July 2012 in St. James’s Church, Bermondsey, included a performance of the Making Music Overture – part of the London 2012 Cultural Olympiad – with music by Orlando Gough and words by John Agard. Other musical gems included the very well-received Ubi caritas by Paul Mealor (as sung at the Royal Wedding in 2011) and well-loved folk songs.
Several RBCS members performed The Jubilee Song at the unveiling of the Jubilee Stone and Queen Elizabeth II Field Plaque at King’s Stairs Gardens on Tuesday 13th November from 2 p.m., in the presence of HRH The Earl of Wessex.
Many members of the choral society also braved the elements to perform various Christmas carols at the Scandinavian Christmas Fair in Albion Street, Rotherhithe on Saturday 24th November.

Our 2012 Christmas concert was held at St Mary’s Church, Rotherhithe on Saturday 22nd December 2012. The concert included a performance of Handel’s celebrated and exquisite Messiah (Part I and the Hallelujah Chorus) and John Tavener’s powerful and spiritual God is With Us: A Christmas Proclamation, as well as other festive works and Christmas carols. The concert was well attended with an audience of around 150 people and comments received from some of those who attended included “heart-warming” and “a very special experience”.

Our Musical Director excels in finding new challenges for the choir. In 2011 we have been privileged to present two premiere performances, which has been both a musical challenge and a great excitement.
We were the first choir to perform in the shaft of Brunel’s tunnel, a wonder of the Victorian world, at the Brunel Tunnel Museum (link to their site) in Rotherhithe. Choir members researched relevant repertoire (link to the locally relevant repertoire page), rehearsed and delivered three performances to enthusiastic audiences of museum visitors. It was quite an adventure picking our way down through the difficult access, and finding enough light to see our music by, but the quality of the sound down there more than made up for any difficulties. Truly, as our Musical Director said, the shaft is Rotherhithe’s ‘cathedral’ as the circular wall creates an enormous acoustic and resonance. The choir has a professional video of the event. The project was funded by Rotherhithe Community Council for which we were most grateful.
Only a few weeks later, with the RBCS Percussionists we performed the UK premiere of Paul Sarcich’s Percussion Mass, in the presence of the composer. Choir members found the contemporary music quite a challenge. We singers were keyed up by the presence of Paul Sarcich, and were determined to give it their best. Add to that the rhythmic excitement created by the four percussionists and we had a recipe for a taut performance. All concerned, performers and audience, were stunned afterwards by the musical and emotional power of the occasion.

The choir is frequently asked to sing at local events, and over the last few years has pulled together the beginnings of a collection of locally-relevant repertoire, which we can perform as appropriate at local occasions. It is only a beginning, and RBCS has applied for funding to develop it further into a local history in song. We have applied for further funding to support this project.
Our locally-relevant repertoire so far includes: